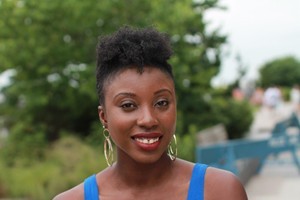 It’s no surprise that Nas’ Illmatic debut album is still thumping at the heart of hip-hop 20 years later.

Known as one of the greatest hip-hop albums of all times with Nas’ raw talent and gritty lyricism, Illmatic continues to make big waves in the industry with the Nas: Time Is Illmatic documentary topped off with a year-long educational initiative.

The 74-minute film, which first premiered at the Tribeca Film Festival in April, is available in theatres, on demand and iTunes, and will be screened across the nation during a tour throughout the month.

Filmmakers One9 and Erik Parker, who attended a press conference Monday, September 9th with Nas at the Tribeca Film Studios, said this isn’t a film about hip-hop but rather an American story. The film strays away from the typical music documentary as it revisits the 41-year-old’s vicious Queensbridge, New York, childhood and tells the bigger story of the influences, such as his brother Jungle and their jazz musician father Olu Dara that helped shaped his music.

“We had to sacrifice a lot of (the music) to tell about the influences that made Nas who he is to make that album,” said Parker, the writer and producer. “If we don’t understand the people in Illmatic, we miss a great opportunity to make a change.”

Nas, who dropped out of school after the eighth grade, sat astonished at the thought of a film that surrounded his life and hopes it will motivate young artists to overcome their odds.

“If you’re from the streets, you kinda feel like prestigious schools are not for you,” said Nas, mentioning his honor last year of the Nasir Jones Hiphop Fellowship via Harvard. “I was surprised that I fit the idea. To bring me there was saying to America: We have to bridge the gaps between those guys in the streets.”

“It’s important that everyone in rap reaches out to young artists,” said Nas, who is admired for his one love for his community. “Then, it’s up to that young artist to show up, and that’s where it gets real.”

“Back then, it wasn’t about ‘I’ma get rich tomorrow.’ It was to give people the story that came after Chuck D, after Eric B, after Kool G, after Ice Cube. We were like reporters who came after the greats,” Nas recalls.

He said the film helped him remember the beginnings and gave him the footing to do what he’s supposed to do today.